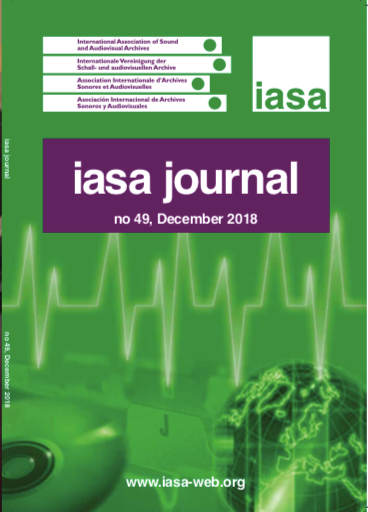 The paper presents the benefits of a collaborative approach in the domain of audiovisual archiving in two very different contexts: NCAA in India and VIAA in Flanders. Following an initial contextualisation in the respective countries, the authors share a detailed modus operandi, outlining the functionalities and traceability matrices of the implementation processes involved in the networks that they have managed to build. Especially critical are the insights and parallels between NCAA and VIAA in the domains of audiovisual digitisation, digital preservation and access. Concluding with a look to the future, the authors hope to put forward the idea that a well-defined collaborative approach has the potential of functioning as a possible solution to the needs and aspirations of all stakeholders - content providers, digitisation agencies, archival network and a wide range of potential users.

This work is licensed under a Creative Commons Attribution-NonCommercial-ShareAlike 4.0 International License.

Signed articles and reviews represent the opinions of the authors and do not necessarily reflect the policies of the Association.

Besides preservation and annotation he bridged a first gap between archives and new technologies assisting in the development of the MAM at VRT. He also coordinated the editing of www.75jaarradio.be and the upgrading of the main database.

In 2008 Brecht joined FARO to research the contextualisation of AV heritage in the BOM-VL project. From 2008 to 2013 he lead the digitisation of VRT’s radio archives. Main tasks also included the international level, as a project leader for VRT's contribution to EUscreen.eu and the strategic one, following-up Flanders’ AV-archives policy.

Since June 2013 he serves as a Digitisation and Acquisition Manager the Flemish Institute for Archiving (VIAA). Now he leads the digitization of the Flemish audiovisual heritage both in the media and cultural heritage sector.

In his 15 years’ experience, he’s built a solid list of scientific and popularizing articles and served internationally as a reviewer and speaker. As an active member of the International Federation of Television Archives (FIAT/IFTA) he was on the Media Management Commission for 5 years and took over the Chair of the Preservation & Migration Commission in 2016. Since 2014 he's a member of FIAT/IFTA's Executive Council and in 2017 he became the Secretary General.

Brecht DECLERCQ always tries to connect history and media to the endless possibilities of new technologies. Driven by passion, curiosity and quality, he’s a flexible constructor, always open for new initiatives and challenges. He’s fluent in Dutch, French, English, Italian and German and enjoys working in an international environment. Living in Antwerp, his personal interests include international politics, contemporary history, summer evenings with friends, and everything Italian.

Irfan Zuberi has been involved with the arts for nearly twenty (20) years as researcher, cultural consultant, editor, festival & exhibition curator and audiovisual archivist. He holds a Master of Philosophy Degree from Delhi School of Economics with a thesis titled ‘Theodor W. Adorno’s Theory of the ‘Culture Industry’: A Critical Appraisal in the Context of North Indian Classical Music’ (2007). He has over fifteen (15) years of work experience in the domain of archiving, having successfully completed projects at Ravi Shankar Institute for Music and Performing Arts (2002-2005), Aga Khan Trust for Culture (2009-2013) and NaadSaagar Archives and Documentation Society for South Asian Music (2009 onwards). Since its inception in 2014, Irfan is the Project Manager, National Cultural Audiovisual Archives, the world’s first ISO 16363:2012 certified Trustworthy Digital Repository, at the Indira Gandhi National Centre for the Arts, New Delhi, India.